VRMP: The 5 People You Meet in Hell 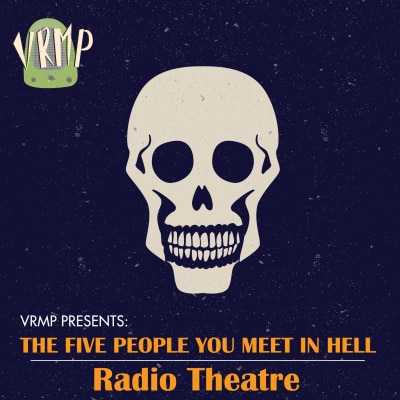 I realized that I did not post anything about VRMP and now we have wrapped! That’ll happen when you’re hard at work!

SO. VRMP Radio Presents: The 5 People You Meet in Hell is a 6 episode radio play series that myself, Stephanie Cooke and Lily Mills created. Once a month we performed a new episode LIVE at the Social Capital theatre here on the Danforth! You may recall Grandma’s Silver? Well that was performed on opening night! As an opener!

Along with Jenny Tang and Steve Speers, I wrote the music and I also performed!

Oooo there’s a pic of me performing!

Dave is just a regular guy who does regular things until all of a sudden he dies and is damned to hell for all of eternity. With Dave’s caseworker from hell (literally), he takes a trip down Memory Lane to relive the five biggest and worst moments from his life that directly influenced the big decision.

And here are all the episodes!